Thank you for joining us at Whistling Wolf Café! Our motto is “You might not always get what you want, but you’ll always get what you need.” As you can imagine, serving customers by giving them what they need to feel better instead of what they prefer can be tricky, but I trust that your amazing tea-brewing skills and customer service will win them over. We average three customers an hour, so you’ll have breaks in between.

Oh! Before I forget, there’s a small shop right next door with things that could help you out. Sometimes there are even people looking for a bit of work. Just be sure you use your own tips to purchase them or the owner will be, well, not so happy. Also, I hate to say it, but if you get three bad reviews, it’s really not going to look good for either of us. So do what you can to avoid that.

Whistling Wolf Café is a solo café sim game that takes 10-20 minutes to play. You are a master brewer who is more focused on what a customer might need rather than what they want, and that can complicate things. All you need is a deck of playing cards, a handful of six-sided dice, and something to take notes with.

A very special thank you to Antonio for writing a Spanish translation of this game! He not only translated it, but took the time to fix any potential cultural gaps for anyone outside of the US! Please be sure to visit Café El lobo aullador!

If you would like to see a playthrough, Vinca Vinye was a lot of fun to watch! You can enjoy the entire video or jump to the smoother second playthrough here: https://www.twitch.tv/videos/1304787280?t=01h51m14s

In order to download this game you must purchase it at or above the minimum price of $3 USD. You will get access to the following files:

Support this game at or above a special price point to receive something exclusive.

If you don't have much to spare, feel free to grab a Community Copy.

For every dollar, rating and comment on this game, I'll add another copy to the pool.

I have some questions. Spades and Hearts written "so move the result of the die roll 1 away from the TN".

1. What TN is there? I think it's probably the card number. However, it doesn't seem to be specified in the PDF.

2. If the die and TN are the same, will the result of the die be corrected?

Reviewing the rules, I can see where it could be more clear. Thanks for bringing this to my attention!

1. TN is the Target Number, referring to the number on the card.

2. For moving one away, yes, it will be corrected. It's why those cards can be so challenging and items become so important. For moving one closer, since you can't move any closer, then an exact die roll doesn't get corrected.

3. The affects are applied after you assign the die. I had mentioned to make note of it before assigning the die in the rules so players can take that into consideration before assigning it, but I can see how that order could cause some confusion.

4. The affect would still push a 6 away from the Target Number. So that particular die would become a

5. The individual card affects only effect the die you assign to it. So if I have a 3 card that pushes the die one away from the TN, and a 3 card that pushes the die roll one closer to the TN, and I roll a 3 and a 2, then I'd probably want to assign the 3 to the first and the 2 to the second. That would mean that the 3 on the first one would still score me $2 and the second will score me $5.

6. My biggest tip for the game is to make use of those items. Much like restaurant simulators, they are very useful for affecting dice rolls and helping with changes like that.

I hope that answers your questions. If it helps, Vinca Vinye streamed a second playthrough on Twitch: https://www.twitch.tv/videos/1313335043

I understand. Thank you.

Thanks again for asking. I made notes so I can clarify for the next update :)

It's been a few weeks since I played this game, and I'm still thinking fondly of it. This is a great game for a quiet night in with your favourite brew. It's fun, it's replayable, and it's very sweet. Highly, highly recommend this game to all.

Thank you very much! It was so much fun watching you play <3

This is a wonderful little solo game by a wonderful creator, and it's on sale for basically nothing right now.

You should seriously check it out.

Oh wow, thank you so much! I can't stop smiling after reading this <3

Thank you for allowing me translate and adapt this great game. It’s easy to play on rules but it requires some mental effort to maximise your profits by the end of each working day. It is very thematic and demanding, allowing a big replayability. Such a great game! Antonio 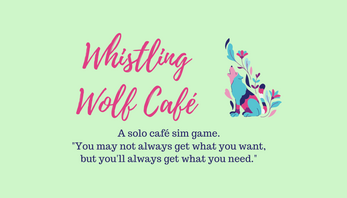